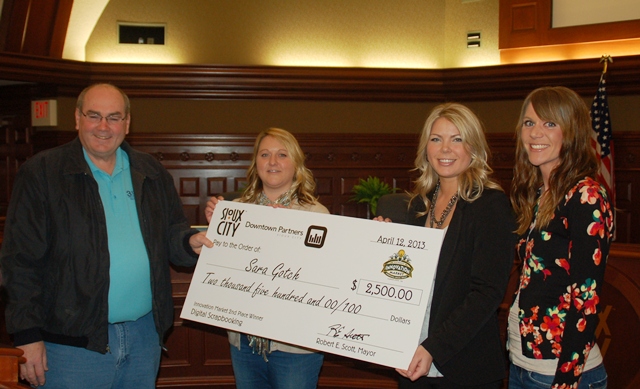 This is the first year Innovation Market has had two winners. The first place cash prize went to Chelsea and Nathan Schultz with Eat Sioux City, an online restaurant directory exclusive to Siouxland restaurants. The two will use the latest technologies to make each listing appear on search engines when someone searches for a restaurant in Siouxland.

“There were so many great ideas submitted in the Innovation Market, we had no idea that we would be selected as this year’s winner. We plan to use the prize money to promote Eat Sioux City so that everyone can know about the best place to go to find the best place to eat. We also will be using the money to join the Chamber of Commerce and SCGO. The Innovation Market has provided us with a huge opportunity and we look forward to meeting with the Chamber and having an office space to begin turning our idea into a reality,” said Nathan Schultz in the SCGO press release.

The second place cash prize went to Sara Gotch with Digital Scrapbooking, which takes old photo/video memories and creates a digital photo/video scrapbook. Gotch was awarded with her $2,500 cash award on Friday, April 12, 2013, at the Sioux City City Council chambers.

“I’ve been doing these types of digital scrapbooking videos for friends and family for the past 10 years. So I figured with my gift and passion, why not share it with the public? I’m so fortunate to have received runner up, partly because the last two years there has only been one prize. And thanks to the City of Sioux City and Downtown Partners believing in the end goal SCGO’s Innovation Market, I am able to move forward in my entrepreneurial goal here in Sioux City. I’m very grateful and excited to see where my innovation will take me,” Gotch said after the event.

Other finalists included: Time Trade, which sets up a system of community barter where members exchange services based on a like-for-like exchange of their time; Children’s Museum of Siouxland, a family-oriented, hands-on children’s museum with emphasis on providing educational value while fostering a child’s creativity and imagination; and Static Entertainment LLC, a nightclub and event hosting company.