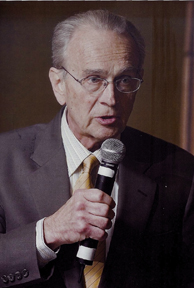 James Autry – author, poet, and former Fortune 500 executive – will present a lecture based on his book, “The Servant Leader: How to Build a Creative Team, Develop Great Morale, and Improve Bottom Line Performance,” at Morningside College on Wednesday, April 24.

Autry grew up in Memphis, Tenn., and Northen Mississippi. He attended the University of Mississippi, where he was elected into the university’s hall of fame during his senior year, and graduated with a bachelor of arts in Journalism.

Autry has written 10 books so far, including “The Servant Leader,” and his works have had a significant influence on leadership thinking. One of his books, “Love and Profit, the Art of Caring Leadership,” won the prestigious Johnson, Smith, and Knisely Award as the book that most contributed to executive thinking in 1992.

Autry’s career highlight came at  The Meredith Corporation, where he served as senior vice president to the company and president of its magazine group. In 1989, he was named Magazine Executive of the Year by the Association for Education in Journalism and Mass Media. At the time of his retirement in 1991, Autry was regarded as one of the most successful and respected magazine publishing executives in the country.

The lecture will be held in the Klinger-Neal Theatre and is scheduled to begin at 7 p.m.

Autry will also give a short address at the 75th anniversary celebration of “Kiosk,” Morningside’s literary magazine at 3 p.m. in the UPS Auditorium in Lincoln Center, 3627 Peters Ave.

Both events are free and open to the public.