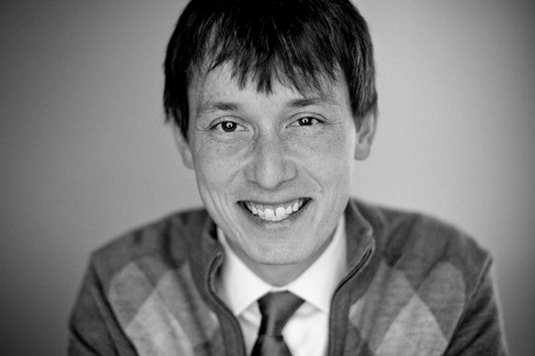 We couldn’t catch up with him in person, but were able to ask him via e-mail 5 questions about entrepreneurship, innovation and his inspiration.

How and when did you get started as an entrepreneur?

I often say that at no point growing up did I ever consider entrepreneurship as a path. I was a computer science major at Iowa State, and out of school got pretty standard software development jobs. My final “real job” however, was the straw that broke the camel’s back for me – terribly boring, uninspiring and soul sucking. It was at that point that I decided that the only way for me to truly enjoy going to work every day was to create that environment ourselves. So with a partner, we set out to create our first company – Brightmix – around the idea of building a company with a great culture, and attracting like-minded employees to come work with us.

What is the most important piece of advice you were given when you were starting out?

We weren’t given much advice when we first were starting out, as there wasn’t really a strong network of people interested in startups and entrepreneurship at the time. So we learned most things simply by trial and error. The biggest general piece of advice that I got though, was “surround yourself with great people.” This is the thing that we’ve carried with us all along the way.

How do you gauge which ideas you think will work and which ones won’t?

I’m not really an idea person, I usually leave that up to others. However, the process for vetting ideas for me typically comes in a couple of ways. No. 1 – Is it something that I’m personally passionate about, or could be? Ideas that I’m not excited about aren’t likely to work out. No. 2 – Is it possible to build a prototype and get it in the hands of people early on? I’m not really interested in boiling the ocean, and tend to get more excited about ideas where we can build something and make money almost on day one. No. 3 – Is it solving a real problem for people? I get excited about ideas that can have passionate customer advocates. I want our customers to “love” using our products.

Entrepreneurship is getting a lot of headlines lately. Is it just a fad?

In the space I care about and pay attention to – tech entrepreneurship – there is certainly an increase in attention from the media, etc. I think overall this is happening because it’s increasingly easier to start technology companies. Notice that I didn’t say it’s easier to grow or build companies, that’s still incredibly hard. But because of this ease of starting, you see more and more people “able” to start companies. Definitely not a fad though, it’s here to stay.

What role will the Midwest play in developing a national culture of innovation in the future?

We’re big proponents of regions playing into their relative strengths, and not trying to be something that they’re not. For this reason, the Midwest will never be Silicon Valley, and thus will not see Silicon Valley-style companies. We’ll never build Twitter here. Or Instagram. We are however, good at building companies that produce real value for real customers. They may not grow to be $10 billion companies, but we can build really valuable companies, that sell real products, and that are run by honest, hard-working folks. That seems to me to be the role the Midwest will play.